admin
I was minding my own business chasing trains on the UPRR Cuero Subdivision with my boy on May 17, 2020. We stopped at the crossing on Old Cuero Road near Yoakum, Texas to get a south bound coal train passing the defect detector at MP 68.8, as I have done many times before in the past. After standing out in the heat with my boy for about 30 minutes or so, I decided to park in a nice shady spot on the side of the road. While setting up my camera in the bed of my truck, to shoot over top of any vehicles that might obstruct a ground level shot, I was approached by the residents of the house that I had parked nearest. As my camera will show at the end of the video, I wasn't on thier property, and I never filmed thier residence or their persons, except the wife (who looked more like a wet dog than a lady) who was at the time standing on public property and had no reasonable expectation of privacy. This is EVERY second of footage I filmed at this location on this date, and other than the addition of the intro and subtitles, it has NOT been altered in any other way. No footage was left out, except for the last 20-30 seconds of the encounter (which wasn't filmed), when thier big ass dog walked away from my truck and I saw an opening to break down my camera and try for a different location with less stupid ass motherfuckers present. Was I in the wrong? The local sheriff's office doesn't think so, and neither do I.

Side note: I don't recommend you conduct yourself in this manner when out railfanning and approached by unreasonable persons, but if you do MAKE SURE YOU ARE IN THE RIGHT! 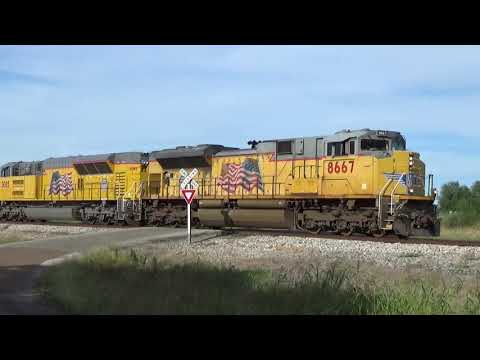 I was minding my own business chasing trains on the UPRR Cuero Subdivision with my boy on May 17, 2020. We stopped at the crossing on Old Cuero Road n...